This blog is pining away


I decided I had to write something here because it's been almost 3 weeks since I posted anything, and if I let too much time go by I'll get all self conscious about it and not want to write, and so forth and so on.
I think of this blog as the journal where mostly I record stuff I do, with photographs. That's so I don't have to write in the mixed media journal in which I mostly drew, painted and glued and did not like to write in, and in which I suddenly stopped doing anything at all.
The last thing I did in that journal was this double spread. 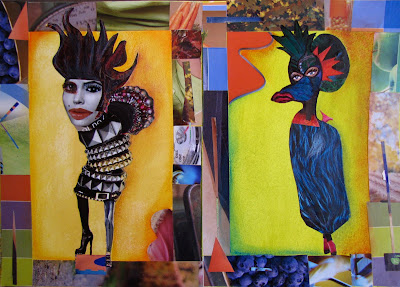 I had watched in rapture as Teesha Moore demonstrated this technique, then ran out and bought more supplies - surprised that there even were any supplies I might still need - made the freaky creatures above, never did all the doodles and writing I had intended to do on the pages, and that was it. It was the beginning of November and I haven't picked up a paint brush or a pair of scissors since. I worry myself sometimes. After that I completed an online altered photo class (or was it two?), threw myself headlong into books and retreats on Christian mystics and yoga philosophy, and now just scribble illegible summaries of my dreams in a notebook, with an occasional line about an important event or emotional state.

My work table with all my expensive tubes of paints, stencil supplies, jars and jars of gel medium, pens, pencils, oil sticks, rubber stamps, and who knows what, sits in the hallway, with what was left of its work surface now hidden by four tall stacks of books that I intend to read. Every time I walk by they whisper to me, "fickle, fickle squanderer of money, you couldn't live without us and now where are we? collecting dust, that's where...".

I could think about the jewelry-making supplies I have that could last several lifetimes, and that live in the same room with an armoire full of yarn, needles, and knitting books, not far from quite a collection of essential oils and aromatherapy books; and I could think about the dried up jars of ceramic glazes in the basement, that keep a cabinet full of silk dyeing supplies company, but I won't. It would just be too disturbing.

I know I am not alone in this. I know there are others out there like me. From their blogs I have glimpsed their world of passions found and forgotten, of stashes gathered and abandoned. Do you feel guilty too?

Since my intention for this on-line journal is that it be a photographic and written record of the stuff I do, this is what I have been up to since the retreat at the San Damiano Center a month ago. Two weekends ago I participated in a three day webcast conference held at The Center for Action and Contemplation in Albuquerque, N.M, entitled Following the Mystics Through the Narrow Gate, more or less on the lines of the retreat at San Damiano, and last weekend I attended the Yoga Journal Conference here in San Francisco. A little side note here. I don't actually do yoga. I signed up for the conference a few months ago, when I had every intention of "really getting into yoga", but then not being able to because some kind of stuff is going on with the nerves coming from my cervical vertebrae, and maybe carpal tunnel and whatever. Fortunately 5 of the 6 classes I signed up for were mostly lecture and chanting, so I was still able to move at the end of the weekend! In any case, both events were pretty much mind blowing, but I have no photos of either.
I do, however, have a couple of photos of this mellow, sunny Sunday, when the rain finally let up, the skies were blue and the blossoms pink. 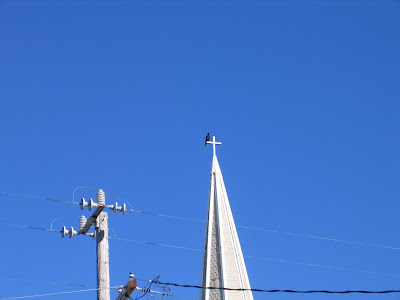 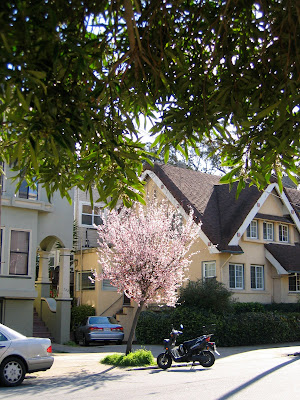 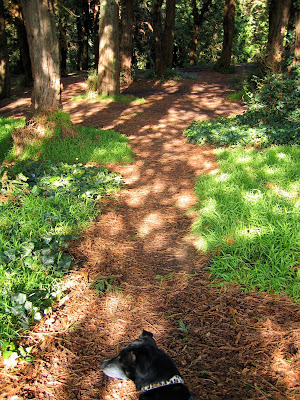 My fave photo is the one with the dog at the bottom.

Very good point Paz!
That photo is my fave too, because it has my Eden in it!

Hello, I found you from the true north arts blog page - I am currently enrolled in the course. I signed up for the suzi blu class, inspired by your drawing (already working on faces, anyway.) (I had never heard of her before.) Also, in October I spent the month in Florence, Italy, and I while I was there I painted an icon in the Byzantine tradition.

Anyway, I have a lot of art supplies and books, too, and, I just consider them all part of my journey. I don't like guilt so I don't there!

Sounds like we journey to a lot of similar places!
Suzi Blu is a trip, isn't she?
I will try to remember your comment about guilt, and just not go there...

that was supposed to say I don't go there. :D

I am going to Macworld at Moscone Center Thurs & Fri - would you like to meet for lunch or tea or something?

Hi, I don't know your name because your posts come up as "anonymous".
It would be nice to meet, but a bit complicated. I don't think either of us wants to put our email or phone number up here, although I'm pretty sure you can find mine somehow. I work far from downtown and live even farther, so lunch is out, and today I must be home by 6. Tomorrow however I could possibly be down by the Moscone center around 5:15, but then I have to be back to the Laurel Village district by 7 pm for an event I'm attending.
whaddya think?

Hi, dear, anna maria, I didn't see your contact info tho I looked for awhile. Maybe I can send an email to Katheryn at true north arts and she could forward it to you? my name is jeannine.

I am not coming into San Francisco today after all, I'm sorry, I would have loved to have me you today!!!! but I may be tomorrow late morning.

Hi Jeanine,
Not sure about Saturday. I know Sunday won't work for sure. Is your info somewhere?

Your stashes sound just like mine ~ paints, brushes, stencils, paper, wool & books. (I can add music and silk ribbons to mine.) I feel twinges of guilt, yes, but I also think of it as wanting to be surrounded by things I love & that I can always get back to when I want to. (Perhaps just rationalisation?) Eden is lovely and it is wonderful that you can walk through green parks all year long.

It's good that you keep on posting (I want to get back to blogging, but it's hard since I haven't done it for so long.)

All you have to do is write a post and you're back! Then you can start. And stop again. It's your blog! It would be nice to see your garden photos again, besides, it will soon be spring.

I found you from Kates blog and I too have stashes of essential things that remain unused for looooong periods. But I figure on the journey of life there are many cul de sacs and many seldom used byways, all of which are part of the journey. So I've booted guilt into the long grass and just enjoy the ride. Well, that's what I tell myself on a positive day. Great to find your blog.

I have a similar stash of crafty stuff - yarn, crochet thread, fabric, beads, paper.....even a Kumihimo stand (which I've used once)......and way too many books. I keep imagining some different sort of life where I'll have time to do everything I want to do; other than time I have all the resources I need. Thanks for putting words to my vague thoughts about my collection of stuff, and letting me know I'm not alone!

Thank you all for your comments. I just returned from An Artful Journey Retreat and it was absolutely wonderful. Will blog about it soon!

I found you via Kate's blog. Your posts sounds like I am in my own house... paints, materials, stencils, stamps .. I have struggled with blogging this past year and yes, I have decided that sometimes a picture is more than a thousand words. My "stash" of "stuff" allows me to get to it whenever I feel like it. Guilty? Not at all. :-) Thanks for sharing. Andrea from Germany

I found you via Kate, too! How interesting (and kinda funny) so many of us share this sort of collecting of hobbies, projects, etc.

Nice to find kindred spirits. I used to feel guilty but not so much anymore. It's just the way I am...I could have worse habits...lol!

Love the doggie picture with the inviting path. Pictures that draw us in and make us want to come, too...like that one...are terrific.

Hi Anna Marie,
Thank you for visiting my blog. I thought I would return the visit. What a lovely and interesting blog you have. Yes, I can definately relate to the collecting of art supplies. I may take a break from one but seem to always return to them in the future. (Except for plastic canvas, I will never go back :D
Thank you for brightening my day!

Hi Kim, funny that you should end up on this post, because that image was the last piece of artwork I did for about a year. Now I'm making something almost every day. I go in spurts....

anna maria
Ceglie Messapica, BR, Italy
In mid 2010 I decided that I was going to move back to Italy and at the end of October 2010 that is what I did, from San Francisco, California, to a small town in southern Italy. If all of life is an experiment, then this is one of the major ones of mine! I have a revolving roster of obsessions, but a few seem constant: family memories, art, food, gardening, photography, dogs and a yearning for God. A meta` del 2010 ho deciso di tornare a vivere in Italia e ad ottobre dello stesso anno l'ho fatto: da San Francisco, California a un piccolo centro della Puglia. Se tutta la vita e` un esperimento, allora questo e` il piu` grande della mia! I miei interessi si alternano, ma piu` o meno sono sempre gli stessi: ricordi di famiglia, l'arte, la cucina, il giardinaggio, la fotografia, i cani e il desiderio di avvicinarmi a Dio.

New blog where I will post photos of the world that currently surrounds me: Nella Terra Rossa - In the Red Earth
I used to have a link here to my old blog, Pia & Co, but that blog has disappeared. Oh well. Probably because it was hosted by some Apple cloud or whatever. At least it's still on my old computer. For now at least....

For Humans, Animals and the Planet

A church where I feel comfortable